Kuala Lumpur, Malaysia — a city filled with skylines, skyscrapers, colourful streets and trees purely shading the city along with street markets, parks and shopping malls all around. Aside from this, street food is blaring all over the place. The city is a mixture of everything in one!

Today, in this post, we are going to explore loads of colours from the vibrant city of Kuala Lumpur.

One of my favorite pastry shops in Berjaya Hills. Can’t get enough of breads and the French vibe!

The magnificent Putra Mosque in Putrajaya. It was super hot that time in Malaysia but the magnificence of the mosque was so worth it.

Taking a break from all the walking and biking, time to play some carnival kid stuff! Falling in line with the other kids.

The dreamy castle entrance of Berjaya Hills. Too bad, I did not bring my crown and gown!

Another breath taking castle found within Berjaya Hills. Couldn’t take my eyes off the brick walls, it looks ancient and legit.

This adorable windmill found along the streets of Malacca is an instant back drop for cute photos.

The bridge that took my breath away goes to Putra Bridge. Definitely the most prestigious bridge in Putrajaya and is famous for the sunset views and spectacular photos that can be taken here.

Putra Mosque also known as, Pink Mosque, is a grand and famous mosque found in Putrajaya. The beauty of this sacred place instantly captured my eyes.

The gigantic and well known landmark of Malaysia is no other than Petronas Tower. This skyscraper is even magnificent at night with all its lights.

The overlooking façade of the European like town called Berjaya Hills. The colors of the different houses are perfect for capturing photos, pretending you are in some place in France.

This adorable trishaws I cannot take my eyes off, so colorful and vibrant I can’t resist!

Flags are all over the city as citizens prep up for Malaysia’s Independence Day.

The Dutch Square, one of the famous landmarks in Malacca, is the central of the old town, distinguished by a group of bright, terracotta-red colonial Dutch buildings built way back the 1660.

The Floral decorations of one of the trishaws in the town.

Malacca, despite its heat, is peaceful and has beautiful views of lush greenery.

Want your photos to be featured? E-mail trishavelarmino[at]gmail[dot]com for more info! 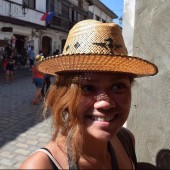 Gienah is a strong willed lady, driven by her dreams and the beauty of life. She is into modern thinking, education and empowerment. She loves travel and adventures, photography and sports, in which these things make her alive. She wants to be a photojournalist someday while trying to become established in the corporate world. She is a post graduate labor law student, a writer/contributor for a few travel blogs and a self-confessed geek. She thinks she must be a renaissance woman, that she is interested in so many different things and can never really imagine herself doing one thing.

by Nick and Val Wheatley

Living in Surat Thani, Thailand: life as an expat in the city of good people