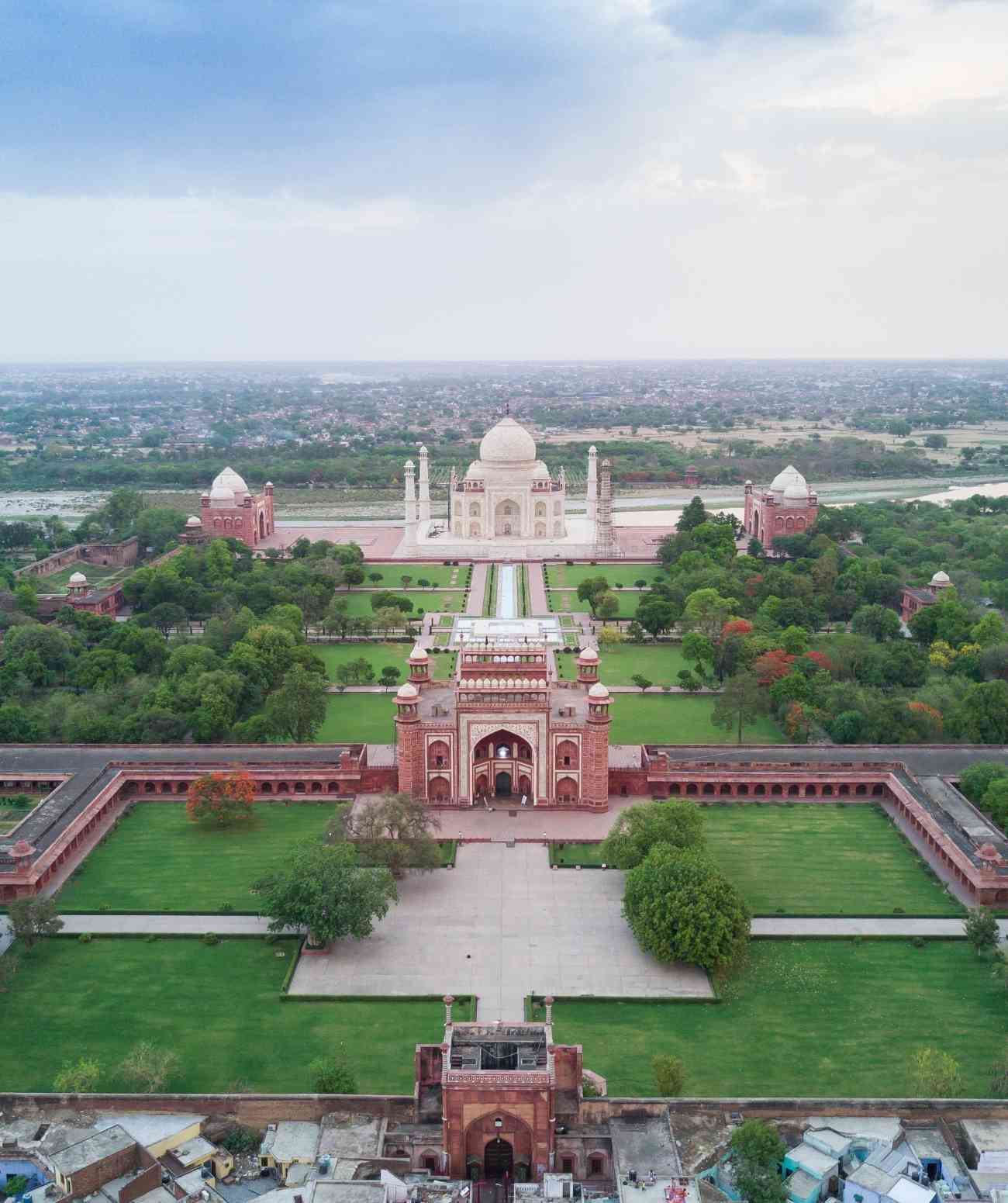 “Can I come?” I asked the police who looked like a younger Tom Selleck.

I immediately dressed up without even washing my face to see what’s happening. I hurried because for some reason, I have a feeling that I can solve things with the police but in reality, I am that hysterical no-wife (like the time when no-husband was detained in Morocco for his Israeli passport but that’s another story).

No-husband and I stood there, not understanding anything while Tom Selleck, two other policemen in light khaki outfits, and our 20-something hotel receptionist were arguing. We didn’t understand a thing but we knew shit is about to go down.

All over the hotel, there were signs saying “droning is not allowed.” The signs were at least two inches apart from each other it looked like a wall full of electoral campaign posters on top of each other.

Okay, we get it. Droning is not allowed. At least I did.

I don’t talk about no-husband a lot but let me tell you that this person is not hard-headed but is someone whom you can’t stop if he wants to do something. One moment he’s into surfing, another he’s into photography, another moment he’s into Interior Designing – and I GET THAT. I truly do. And I honestly love this about him. I have never met a man in my life who’s as tenacious as no-husband when it comes to doing what he wants. Nothing and no one will ever stop him. Not even me. Most of the people I know who have this attitude are women. 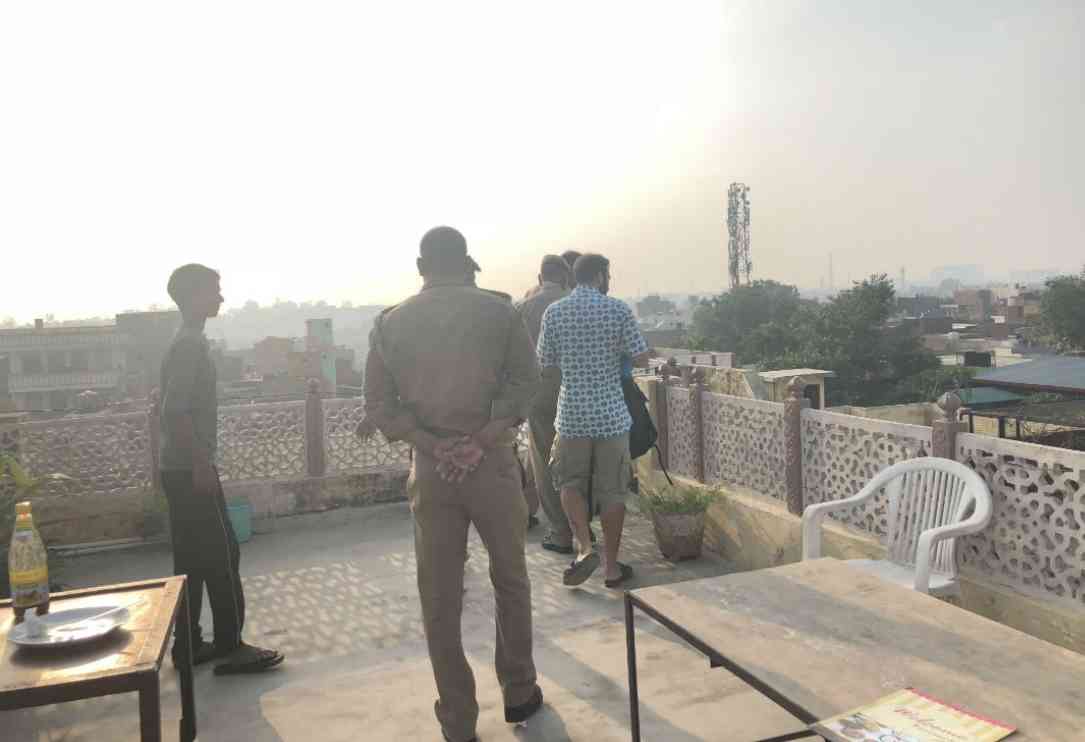 A photo I secretly took when the police were leaving.

We are the same person so I also feel like I need to be supported in everything that I want to do but at this moment, I want to smack him in the face for being a complete idiot; for flying a drone when it clearly says it’s not allowed. He even knew the drone rules in India prior to arrival! I just couldn’t because we were in front of a lot of policemen and the hotel crew was all around us. It wasn’t the time to be ‘hysterical.’

I was honestly torn between his love for what he does and with all measures, to do everything to achieve what he wants and his conscious efforts in breaking the rules. I didn’t know what to feel. I was feeling bad and proud at the same time.

I see the breathtaking view of the Taj Mahal in front of us. The hotel we picked is not a luxurious one but the rooftop has a clear view of the Taj Mahal. I feel very fortunate to have had the chance to book this hotel despite their hectic reservations. I was supposed to take pictures of the Taj today and I knew it was not going to happen. I didn’t have the mood for it.

All I was thinking was no-husband being in an Indian prison. I’m sure you get the picture. I was also thinking about teaching him a lesson by not calling my Indian contacts to help. I can definitely leave him there a few nights without claiming him because no matter what happens, I knew he will get out. I just didn’t know what it will cost us. Either way, the only solution I am seeing is money: if they confiscate the drone, it’s money for buying a new drone. If they want a bribe, it’s money, too. I don’t know any way out of this but money.

While all these things are running in my head, they continued to argue. I looked at our 20-something receptionist scratching his head. Although I had no idea what he was saying, I am sure he was apologizing on no-husband’s behalf. If you didn’t know what happened and you look at this scene, you will see that the receptionist looks like the culprit – like he was claiming this was all his fault.

But clearly, it wasn’t. The signs are all over the hotel and it was pretty obvious that no-husband was to blame. It’s just that, at that moment, the police seemed to be blaming that poor boy from the hotel.

This made me want to smack no-husband’s head more. Someone is being blamed for his wrongdoings and I am not all for that.

Tom Selleck, his crew, no-husband, and 20-something receptionist left for the police station and I sat there alone, still thinking of the worst-case scenarios there is. I called my childhood best friend from the Philippines who has contacts in India just in case something bad really happens. I am very sure no-husband will sit at the police station defenseless because he didn’t speak the language. Nobody’s even talking to him because the receptionist takes all the blame. My decision to not claim him in case he goes into an Indian cell was still there but I still want to know my options.

I called my friends Alyne and Nas who had the same experience in India. I wanted to ask what they did in order to get out of it but they are currently in London. The timezone just didn’t fit. They’re probably sleeping at 7:00 am New Delhi time. I ordered coffee from the hotel boys who were trying to avoid looking at me when I am looking but even if I was on my phone, I can see them staring at me. I waited and waited (not calmly, mind you) until I received a text from no-husband.

“I feel very bad because they are kind of blaming the receptionist.”

I felt sadness that slowly turned into horror. Apparently, no-husband is just sitting there comfortably and drinking chai.

I always had a fascination with India’s caste system, and through the years, even without planned visits to India, I was drawn to read about it.

India’s caste system is among the world’s oldest forms of surviving social stratification. BBC explains that this system which divides Hindus into rigid hierarchical groups based on their karma (work) and dharma (the Hindi word for religion, but here it means duty) is generally accepted to be more than 3,000 years old.

In a more understandable way, the caste system is a class structure that is determined by birth. If your parents are poor, you will be poor. If your parents are rich, you will be rich. It is deeply ingrained in Indian society that if your great-grandmother, grandmother, and mother are housekeepers, this is also the only occupation you think you can do and you will do it. Although most educated people in India are trying to get out of this cycle, it is still very difficult to change as it has been their default thinking. Their consciousness is set to this preselected system of their society.

Again, I imagine that boy taking all the blame for no-husband because this is what he thinks is right; that this is what he deserves. I remember when they left the hotel, he was even carrying no-husband’s bag and that, for me, is a sign of practicing your place in the caste. In the western world, no one should carry your bag for you or serve yourself but you.

I am not sure how foreigners fit in the caste system but the way Indians show it, it appears to me that foreigners are at the top of the chain. I never saw them use force against no-husband when they have the right — they caught him in the act. He’s even offered tea at the police station, for Christ’s sake!

I also thought about how the receptionist, that nice and sweet boy, thought that it is just right to take this blame because of his place in the pyramid.

That’s it??? What do you mean that’s it? Did you pay for something? Did they confiscate the drone? I replied.

“No. Everything is okay.”

The only thing they did was detain him for one hour and made him write a letter that stated:

The English writing above is so confusing to me but the way I understand this is that the hotel did see him droning but did not stop him from doing so. In other words, the hotel was to blame? What do you think? I am pretty much convinced my understanding is 100% accurate.

I again started feeling about this. You mean foreigners can just get away with anything even if we are not really sure about their place in this so-called caste? I know it’s going to be very bad for no-husband if he was to be punished accordingly but what the feck – this is truly not fair for these people working at the hostel who accommodates us.

I saw the receptionist again after a few hours and guess what? He smiled at me. I smiled back but I can’t take the feeling of how this marvellous person thinks of himself as a lesser person.

I was reminded by my childhood best friend that some cultures are very hard to accept and that if I am to continue to travel India for the next two weeks, I should get rid of my Western oversensitivity and embrace the ‘Indianness’.

After all, we cannot do anything but respect their culture even if we think it’s not right. It’s not imposed on us anyway.

Note that flying a drone is illegal in India. Although your drone will not be confiscated upon entry (not as hardcore as Morocco), it’s best if you secure a permit before using your drone in the country.

Mexico diaries: the story of how I ended up moving to Sayulita

Why I traveled to Brazil: a country that is very controversial for solo female travel

Should you be obsessed with planning your backpacking trip?