Dear girls of the world: don’t let society dictate who you are

Don’t let society dictate who you are. Better yet, while you’re at it, don’t let anyone dictate who you are. Coming from the Philippines, I was expected to follow the norms of society. Graduate college, get a job, get married, have babies. While that works for some, it didn’t for me. Early on in life, I knew I wanted more. While some girls dreamt of weddings and having the perfect home, I dreamt of foreign lands and discovering the unknown. As soon as I got my very first job, I started a travel fund and hustled like crazy. I then moved to Boracay Island where I lived and worked for three years.

While I was happy and content, it was there where I met some of the most amazing free spirited people who inspired me to pursue my longtime dream of travel. Despite having a kick ass job (I was the principal of the International School), I woke up one day and decided it was time to go. That day, I quit my job, booked a ticket, and called my parents to tell them my plans. Life was too short and if I wanted to see and do everything that I have spent countless hours dreaming about, I had to do it now.

Armed with one backpack, a camera, and a journal, I bought a one-way ticket to Europe with that plans of traveling for a year. While everyone thought I was crazy for leaving, it was honestly the best decision I’ve ever made as it has ended up opening countless doors for me. Three years later, I’ve backpacked across 4 continents, made countless memories around the world, met my partner in crime and founded a start-up. All of that happened because I chose to defy the life that society set out for me. Dear girls of the world, trust me on this. All it takes is guts. Guts to pursue your dreams, no matter what others think of them.

Windows of Opportunities Turn into Doors and Hallways

Travel flashback: crossing off Santorini off of my bucketlist. It was as stunning and romantic as I thought it would be. Riding a donkey up the calderas and watching the sunset at Oia was such an unforgettable thing for me. All done while sticking to my backpackers budget- new blog post coming soon!

When I left to travel, I was far from rich. In Europe, I budgeted hard. I couch surfed, stayed with friends, and did anything to save a couple of dollars here and there, but I also had the time of my life. At the tail end of my yearlong backpacking trip, I met my partner Tom in Vietnam. After a whirlwind 6 weeks of traveling and dating each other across two countries, I left to go back home to the Philippines. Tom soon landed in the Philippines and ended staying while waiting until I could save a bit more money to leave again. To stay connected to something we both loved, we started a travel blog as a small passion project. Little did we know, starting Adventure in You would end up changing our lives.

Armed with nothing more than a dream that we could travel the world and somehow make enough to survive, we left once again and have never looked back since. Fast forward to today, we have grown our website to become an adventure travel resource site, inspiring people to DO MORE. Somewhere along the way, we incorporated our company and received an Angel Investment which we are using to launch GetStoked, a mobile app for travelers. This life of travel has opened up so many windows, doors, and hallways for me that often, I have to pinch myself to see if its real.

I tried very hard to fight the urge to run around and start throwing leaves everywhere! Autumn in Paris is love ??

When I first quit my job when I was at the top of my career, people thought I was stupid. When I sold everything I owned to go traveling, everyone kept asking me, “are you crazy?” When I did it again the second time around, everyone was convinced I was. While I am lucky that my parents stood by me and supported every decision I made, not everyone understood. I am nearing thirty and everything I own can fit into one backpack but I am also the happiest that I have ever been. Never in my wildest dreams did I think I would be able to travel all over Europe (twice), trek through the lush jungles of the Amazon, and go paragliding while a volcano was exploding behind me (true story). Lastly, never in my wildest dreams did I think that I would end up as a founder of a tech start up company.

I realized that I stuck to the confines of what society had expected me to be, I wouldn’t be where I am now. So, dear girls of the world, be fearless about pursuing who you are. Pursue your passions and never, ever let anyone define who you are.

Who is currently in Chiang Mai, hustling 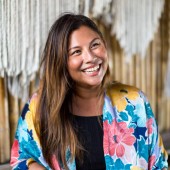 After her year long stint traveling around the world, Anna found her love for exploring new places insatiable. Driven by epic adventure stories and good food, she is on a mission to go, eat, and write about as many places as she can. Anna is currently growing their blog, Adventure in You and developing a mobile travel app GetStoked.