Dear girls of the world: Stop underselling yourselves

Oh, I’m not good at directions… I’m really bad at math… I’ve never driven stick shift before… you do it. Girls are trained to be modest. We undersell ourselves, and often let men take the lead. I’ve seen the strongest, most adventurous women become submissive and far too modest the moment a man is present.

I’d like to think I’m a pretty capable person. I’ve been living in China for years, and I even travel solo most of the time. I can take care of myself, and I don’t need a man to do things for me. Despite that, I still catch myself underselling my capabilities, letting men take the lead.

For example, a few weeks ago I was on the small island Siargao in the Philippines. The only way to get around on the island was by semi-automatic motorbike. While this might be intimidating for some, I should have had no problem. I owned an eclectic bike for a year in China, and I had even driven a real motorbike once before.

But… it had been a year since I drove a motorbike, and I’d never driven a semi-automatic. Instead of taking the reigns and believing in my experience, I decided to share a motorbike with a guy who had only ever driven a few times. You’d think I’d be the one driving, considering I had much more experience than he did. But instead I let him take the lead. He seemed much more confident than me, and taking a backseat (literally) was easier than pushing myself to learn a new skill.

After a few days we realised our schedules were too different to share a bike, and I needed to get one of my own. I was nervous. I’d never ridden a semi-automatic before. I didn’t know how to do it!

After a quick lesson from the owner, I took the bike out for a spin, testing the new automatic gears. It only took me a few minutes before I got the hang of it. I had such a great time that I decided to circumvent the entire island with another guy from my hostel. It took us all day, and the trip even involved some serious dirt biking and an hour ride at night because we couldn’t make it back before sunset.

Why did I do that? Why did I undersell my skills? I had myself convinced that riding a semi-automatic would be extremely difficult. I was afraid to try riding a new style of bike, even though I was a very experienced driver. Surrounded by men who didn’t know what they were doing, I let them be in charge. Why? Because they had confidence.

Hanging prayer flags over the Turquoise Lake in Tibet.

I’m a huge feminist and I believe I’m just as capable as any man. But when it comes time to take the lead, I sometimes catch myself playing a supporting role. Despite believing in equality, society has socialized me to be too modest.

It’s easier to undersell yourself as a girl than it is to try something new. Why should I undergo the stress of trying to learn how to ride a motorbike when I can just hop on the back of a guy’s? I see girls around me doing this all the time. Why challenge yourself when a guy can take care of it?

But is that who you really want to be? Do you want to be the passive girl who always plays a supporting role? I don’t know about you girls, but I want to be the main character of my own story.

Dear girls of the world, here’s my challenge: stop underselling yourself. Every time you find yourself stepping back to let a man take the lead, stop. Tell your boyfriend you want to take turns driving the motorbike. Inform your hostel buddies that you’ll map the way back home. Take the initiative to ask your dad to teach you how to fix a flat tire.

Love,
Richelle
who is currently riding motorbikes in Asia 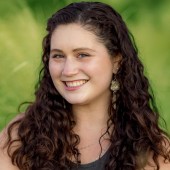 Richelle is an expat, a traveler, and a spicy food lover who blogs at adventuresaroundasia.com. She spent the last few years living in China and traveling around Asia. In her spare time, she enjoys salsa dancing, exploring night markets and stuffing her face with street food.