Dear girls of the world: say yes to traveling for love

Book the ticket, go ahead. There’s a man, he asks you to follow him around the world, he asks you to leave things behind, to take a chance on him. You’re not sure. I understand, it’s a big risk. What if it doesn’t work out? Would it all have been for nothing? Perhaps, like me, you’ve always been one of those women with a plan, goals that you want to achieve at each point in your life, and this certainly was never part of the plan.

Seven years ago I met that man. We were studying abroad in Switzerland for a semester; he’s from the UK, I’m from the US. It was a whirlwind four month romance like I’d never experienced. It felt wild and reckless. He was like an addiction. For a year and a half afterwards we sent letters, packages, cards and emails. We Skyped and paid too much for international text messages. We made long trips to each other’s countries and counted down the days until we could finish our degrees and see each other again.

The only trouble was, we had no idea how that was actually going to happen. I can’t just move to the UK, the same for him to America. It seemed like as soon as one barrier came down, another surfaced.

We had no idea what we were going to do. We didn’t have jobs lined up or lots of savings to fall back on. All we had was each other. We’d never lived together before, hardly ever traveled together. We were in love, but was it all because absence was making the heart far fonder? Or would it last once the distance between us was eliminated?

It was only supposed to be for a year. In that time we would figure out a more long term plan, figure out where we could live and be together. I bit the bullet, much against what my brain and perhaps some of the people around me thought was the best decision, and I booked that one way flight to Auckland.

We met each other in the Hong Kong airport. It was utterly unromantic. We couldn’t find each other, Luke called me after we’d both been wandering around the airport for an hour. He sat in Burger King while I headed his way. It was a sign, I thought at the time. But the moment I was back in his arms after eight months apart I knew I’d made the right decision, but it was one that would change the course of my entire life. Since New Zealand, we’ve lived and traveled through Australia, South Korea and much of South East Asia. We haven’t ever made plans that lasted longer than a few months. I suddenly became this spontaneous person that I didn’t know existed within me.

Love,
Laura
who travels for love 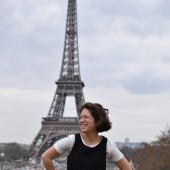 Laura Bronner is an American writer who can’t sit still. After graduating from college she set off on what was meant to be a year of travel. That was over five years ago and she’s still on the move. Since then she’s lived in New Zealand, Australia, South Korea and now balances her time between the US and Europe in search of the next place to call home.