Dear girls of the world: this is what cyber bullying did to me

Click show to jump to the content you are looking for show
Dear girls of the world,
“Why me?” I asked.
“No one deserves to be treated this way. But I am being treated this way, so do I deserve this? Does that mean I am a bad person?”
As painful as it was, I did learn three important things that I want to share with you.
Kisty

The strongest and kindest people I know are the ones who are given the biggest challenges in life. The adversities that we go through serve as a stepping stone to a truly extraordinary life. These challenges make us stronger, more resilient, so we should learn to embrace and cherish them.

Earlier this year, I was accused of copying and plagiarising a somewhat influential blogger. The issue could have been resolved quickly if the matter were handled in private, since I assumed that’s what classy and well-educated adults do. Sadly, the other person took it all out on Twitter for the public to speculate upon on. It resulted to cyber bullying.

Soon enough, people—most especially the ones whom I’ve never interacted with—started to post hateful tweets about me. The tweets escalated: from describing me as ugly and insecure to claims that I had a personality disorder. I did my part; I unfollowed and blocked anyone who caused me pain. But it wasn’t enough. Some weren’t happy that I blocked them, so they decided to create multiple dummy accounts on various social media channels in order to harass and humiliate me further. It was horrible. I never thought I would be a victim of cyber bullying.

The way others humiliated and shamed me made me feel like I was this super horrible person who was beyond redemption. The bullying not only affected my self-esteem, but it also changed my outlook on life. No one deserves to be treated this way. I have been through many adversities that were far more difficult than this, yet I still found myself wanting to die. I was in a state of depression.

These were the questions looming inside my head. I was no longer engaging in any conversations, yet I was still receiving a lot of hate. My detractors, in fact, openly admitted that they go to my YouTube channel just to dislike my videos. I couldn’t comprehend it but I tried to focus on the fact that I can’t change the perspective of other people, can only change mine. It was hard to ignore them and focus on better things, but I tried anyway. Weird as it sounds, I tried to see the positive side of the situation. While people were busy hating on me, I diverted all of my energy into the things that mattered to me the most.

Fortunately, I was planning to move to Europe for a few months to pursue graphic design and illustration, a passion that I have always had since I was a little girl. I knew that moving abroad was not the solution to my problems, but I hoped that being 6000 miles away from the people trying to hurt me would be enough to help me heal my broken heart.

Three days after arriving in the United Kingdom, I went to see the famous Carrick-a-Rede Rope Bridge and the majestic view just blew me away. Right then and there, I knew that things were going to be alright. It was a reminder that the world is a lot bigger than I think it is and that I will be okay. I focused on my art and on pursuing my dreams of becoming a professional designer. I traveled more and explored as many cities as I could while I was in Europe. I took a ferry to Lille, a train to Prague, a bus to Vienna, and a plane to Copenhagen. I even celebrated my birthday in Indonesia (all thanks to Trisha!) and had been granted a five-year visa for both Japan and South Korea. I also got myself a cute puppy who always brings joy to my mundane life. Life was good, and it felt surreal.

My bully said that she was only doing this for a cause: to inform others. But I disagree. Cyber bullying is no way right. Just because you think you are a “right” is not a cause, it is simply an act of hatred and thinly veiled self-righteousness. Hate doesn’t change people, kindness and empathy do.

As painful as it was, I did learn three important things that I want to share with you.

The first lesson is about originality. With seven billion people in this world, there’s a high probability that you will meet someone who shares the same aesthetics and has traveled the same cities, but we all see and process things differently. We all have our one-of-a-kind stories to share. In short, we are all real and original. And instead of trying to claim that we are “first” to come up with an idea that’s been used a million times, we should just celebrate the fact that people are trying, exploring, and finding ways to express themselves. Let us pull each other up to success, not drag one another down.

The second lesson is about bullying. In a world where the expression of our thoughts is sometimes limited to 140 characters, we shouldn’t be so quick to judge people. Bullying someone because they do not share your point of view is not only wrong but also prevents an opportunity for a healthy discussion. Bullying can also hurt people and their future. Words have power. Words can hurt and pierce people. Words can also kill. So, please, be kind and mindful of your words.

Last but not the least – pain. What I had to go through was devastating, and I wouldn’t wish that to happen to anyone, even to my worst enemy. But it’s a learning experience I am graciously embracing. Having failures, making mistakes, and getting hurt are just some of the things that make us who we are today. And who knows? Embracing and sharing hardships might also change and inspire lives.

When things get rough and hopeless, always remember what the late Carrie Fisher said (as quoted by Meryl Streep), “Take your broken heart, make it into art.”

who is still painting the world with pastels

If you have a chance, what will you say to girls all over the world?

This post is a part of the P.S. I’m On My Way’s Ambassadorship for Girl Rising – a global campaign for girls’ education and empowerment.

Girl Rising uses the power of storytelling to share the simple truth that educating girls can transform societies. Our mission is to change the way the world values the girl and ensure that girls’ education is part of the mainstream conversation. 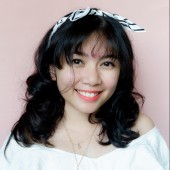 Kisty Mea is a 20-something traveling creative based in Southeast Asia. Born with messy curly/wavy hair, this illustrator/designer has an affinity for pastel colors, minimalist design, and a cup of vanilla ice cream. Blog | Instagram | YouTube