Dear girls of the world: don’t let your gender stop you from rocking a career in technology

When you were eight and someone asked you what you wanted to be when you grow up, what was your answer? I had two answers.

When grownups asked me–especially when my grandmother was around–I would say I want to be a doctor because it felt like it was the “right” answer.

The real answer: “I want to be the second female astronaut.

I knew quite a bit about space and dreamed of being an astronaut because I got addicted to VTech. VTech is a popular toy brand in the ‘90s. One of its models look like a laptop with hundreds of games in it: quizzes, trivia, spelling bees. I would spend every chance I get with my classmate whose father was working abroad and sent him a VTech. One of the questions I always remembered the answer was: Who is the first female astronaut? I didn’t want to say I wanted to be an astronaut because I was afraid that my grandmother would find out that I was addicted to games! I grew up with my grandparents and they were allergic to technology. In fact, video games were banned in our house. That, however, turned out to be an advantage. Since my grandparents only knew how to operate the TV, I was in charge of operating and even sometimes fixing all other appliances: karaoke, 3-disc component system, the VHS. Operating different devices at home developed my curiosity and my love to tinker and fix things. And by banning video games at home, I wanted it even more.

Irene, excelling in the start-up nation of Israel.

I did not become a doctor. I did not become the second female astronaut. The closest thing I’ve ever gotten to space is riding the Space Shuttle in the biggest theme park in the Philippines. What I did become—and what I am now—is a writer that gets to travel the world.

I work with a tech startup in Israel. I started as a freelance writer working with the team; now I’m the Chief Marketing Officer of the company’s second product: I Will Broadcast Live. In 2016, I spent almost half of the year working in Israel. It was such an amazing and unique experience for two reasons: 1. Most Filipinos who work in Israel are in the healthcare industry. 2. Most of the people working in the tech space in Israel are men. As a Filipina working in the tech scene in Israel, I was in constant awe and gratitude for being lucky enough to work with brilliant CEOs, investors, and all sorts of entrepreneurs.

While hailed as the startup nation, there’s still a lot of progress to be made in terms of gender balance in the tech space. Most of the CEOs and founders are still men. And here’s the thing, it’s not that the industry is biased to men. They want women to join the team! But women don’t even look their way.

So, what seems to be the challenge? Why is the technology industry in Israel (and the rest of the world) is still dominated by men? As it turns out, it goes way back to our childhood. Remember when I told you I wanted to be an astronaut when I grow up? Well, most girls have their eyes set on something else. I’m talking about my generation who grew up in the ‘90s. Most of us wanted to be nurses, doctors, reporters, fashion models, singers. It’s very rare for girls to want to be engineers, programmers, or CEOs. When I was a kid, I didn’t even know what a CEO was! So, at a young age, a career in technology is something that most girls don’t even consider as an option. I, too, was in the same boat. While I was fascinated with all sorts of gadgets growing up, I didn’t think of turning it into a career. When I was 16 and about to graduate high school, I got a scholarship in a technological state university to study Information Technology. I turned it down. Instead, I pursued a double major in Broadcast Communication and Literature. Fortunately, a decade later, I reached a convergence of my two passion, communication, and technology, when I started a tech blog and got hired by a tech startup.

With fellow women in tech.

My story is almost similar to a 22-year old Chinese woman. One day a young female entrepreneur from China visited our office in Haifa. Gucci (her American nickname) is the co-founder of TechieCat, a non-profit organization that helps young women in China to pursue a career in technology. That day she came to interview the women working in HiCenter, the accelerator where our startup is a part of. She was surprised to find me there. She asked, “How did they find you all the way from the Philippines?” I replied, “I have a tech blog called Girly Geek. I  help people make use of their gadgets by using it to be more productive and creative.The team back then was looking for someone to review their app, and they found me!” We immediately connected and talked about how women from our country view technology. And it’s almost the same story: Chinese women don’t even consider a career in technology because they believe it’s an exclusive men’s club.  But women like Gucci is trying to change that. With her organization, they help women learn to program and even hacking.

In Israel, there are also many efforts to encourage women to aim for a technological role. One of them is SheCodes, a community of female software developers with over 10,000 members. According to SheCodes.org,  their goal is to “reach 50% female software developers in the hi-tech industry within a decade.” To reach their goal, they hold a variety of events every week across Israel. I was lucky enough to witness one of these events last year. SheCodes partnered with HiCenter for a two-day hackathon. For two straight days, our office was filled with young and vibrant female developers. While I’m not a developer and was not part of the hackathon, I was filled with pride and joy seeing all those women so passionate about what they do and making SheCodes’s dream closer to reality.

I’m not a software engineer or an IT specialist (or an astronaut). But I am enjoying a career in the tech space doing what I love. Sure, there was a time that I didn’t even consider working in this industry. But there are things you loved as a kid that don’t truly go away.

So, dear girls of the world, if technology is something that lights you up, follow this fire. Remember that it also wants you back. It’s not about being a man or a woman. It’s about working together, doing what you love most, and using technology to solve the world’s problems.

who has love for all things tech 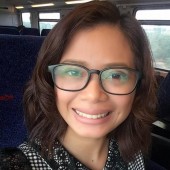 Irene loves two things: communication and technology. With her tech blog and her role as CMO of I Will Broadcast Live, she believes she has the best job in the world. She's also crazy for Turkish coffee, dogs, and zombies. And oh, she thinks she’s funny. Find out by following her on Instagram: @itsirenechan.