[vc_row][vc_column][vc_column_text]I am also from an archipelagic country and I never considered visiting Indonesia. “What for? I live in a similar country I don’t think there’s a different thing to see.” I said. In 2015, “what for?” turned out to be a great embarrassment when I had a chance to embark on an adventure in Indonesia. Whenever we hear the country’s name, Bali automatically comes to the visual but what I found out to be true is that there is so much more to this country than Bali. From my first visit, I already when there three times staying for a minimum of two weeks because spending time and having amazing adventures in Indonesia is easy – you’ll never run out! In fact, I don’t even think that one month is even enough to travel to this wonderful country.

Being the largest archipelago in the world, Indonesia boasts a diverse selection of culture and natural wonders in its more than 18,000 islands. Their ancestry dates back in the 20th century when traders in the Pacific Ocean often pass by. Kingdoms have ruled for centuries until it became a republic. This has left some of the most important archaeological remnants that are being studied today. In fact, some of the first human civilization were discovered in Indonesia, thus it was named the Java Man. The country is also recognized as one of the largest Muslim nations in the world. The songs, dances, and textiles are very intricate that visitors bring them home. From temples to forests to beaches, witness wonderful Indonesia by browsing below.[/vc_column_text][vc_row_inner][vc_column_inner][vc_column_text]

This article also appeared on Read Magazine (Dubai) in print

Using the Klotok, an Indonesian riverboat, cruise through Sekonyer River which traverses through the Tanjung Puting National Park. Along the way you will be able to witness orangutans in their natural habitat where they are being protected in Camp Leakey. Gold mining is also present in some of its surrounding areas.

Known as the world’s largest Buddhist temple, the Borobudur dates back in the 9th century and is a home to thousands of Buddhist reliefs and statues. It is located in Yogyagarta in Central Java. The best time to be there is during sunrise where the natural light shines through its relics. It has since been undergoing renovations being one of UNESCO’s world heritage sites.

This Keraton or “palace” is where the kings of Java resided for centuries. Because of the religious transitions in early Indonesia, remnants of both Buddism and Hinduism can be found all over the complex. In the highest viewpoint of the site visitors will be treated with the backdrop of Mount Merapi and the panoramic view of the Prambanan Temple.

Also part of the temple compound in Yogyakarta, the Prambanan Temple is the biggest Hindu temple in Southeast Asia dating back 850 CE. Visitors are in for a long day exploring the 240 temples in the compound. This archeological wonder has some of the most intricate reliefs of gods Vishnu, Rama, and Shiva. In the complex, they also show the traditional ballet dance, Ramayana, that visitors can definitely watch.

Southeast Asia has always been known for the Batik, a traditional technique of wax-dyeing cloth which creates a visual wonder. Indonesia is the most famous batik producers in the region. Historically, people used this as a daily attire and also in important ceremonies. It transcends religion and became a common symbol for the Javanese. The Museum Batik Yogyakarta showcases how batik is made.

Mount Bromo is one of the hundreds of active volcanoes in Indonesia. She is a part of the Bromo Tengger Semeru National Park where its surrounding area is a famous tourist attraction, including a desert and a visit to one of its crater. There has been a series of eruptions in the past decades but the government has secured a safe zone for its visitors.

A legend about a dragon circulated by early Dutch seafarers has made the island very famous to its locals and guests. While a sizeable amount of population lives in the area, it is best known to be the shelter of the Komodo Dragon, a monitor lizard that can grow up to three meters. It is also recognized as the world’s largest lizard. Apparently it doesn’t throw flames! The island is also a famous diving site and the Pink Beach, which is only one of the seven worldwide. Visitors can also drop by in the nearby Rinca Island.

This famous temple is found on the seasides of Bali. It is beautifully situated in the edge of a 70 meter high cliff.It is part of the Sad Kahyangan Jagad or translated as the “six sanctuaries of the world” which are the six holiest places of worship in Bali. It is also inhabited by monkeys, so watch because they might grab your belongings.

Besides the rice paddies, Ubud is also popular for its monkey forest. It is situated in the village of Padangtegal which considers the area as an important spiritual, economic, educational, and conservation center. It is a home to some Hindu temples and more than 600 species of monkeys. Be careful when handing out food to them since they have grown very comfortable around humans.

Witnessing how close knit Indonesian families are. As the central of institution, family defines one’s standing in the Indonesian culture & society. Extended families are very alive, too! This is a normal Saturday for Makassar where everyone finds time to spend with their families — picnics, improvised slides, big chats, and this huge waterfalls in Bantimurung National Park. Live feed on #Snapchat ?? psimonmyway #TrishaVxIndonesia #TripofWonders #WonderfulIndonesia #Indonesia #Makassar #Asia

Located in the Bantimurung Bulusaraung National Park, this waterfalls will cool off a long day of nature exploration. It is 15 meters tall and naturally cascades on its cliffs. Nearby are also two caves that are easily accessible by concrete stairs.

This is one of the uninhabited islands in South Sulawesi. It is famous for its very long stretch of fine, white sand from the north to the south of the island. There are gazebos where visitors can relax and eat. Snorkeling and diving is a major activity on the island if you’re done sunbathing.

Gili is a group of three small islands in the northwest coast of Lombok. Snorkeling for unique corals and fishes is a reason why tourists flock here. Resorts maintain the islands where they also offer world-class diving lessons popular among the guests. I went around through a glass-bottom boat which was also a unique experience.

Ijen is actually a volcano complex which has beautiful crater lakes. The volcanoes are very much alive and even famous for its blue sulfur flames. The rim of the crater can be reached through a two-hour hike. The turquoise-colored acidic lake is one of the largest crater lakes in the world.[/vc_column_text][/vc_column][/vc_row][vc_row][vc_column width=”1/2″][us_single_image image=”9371″][/vc_column][vc_column width=”1/2″][vc_column_text]

Aside from Bali, what other places in Indonesia that you fancy?

If you’ve been to Indonesia, how was the experience? What else can you add to the list? Good or bad, share it in the comment box below! 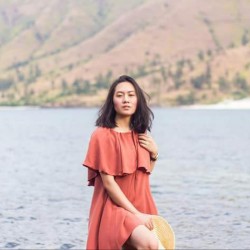 Mikee Denise Pascual
Mikee is a Filipino travel and lifestyle writer who is gradually shifting from a sedentary life to a nomadic one. On a personal note, she dreams of traveling to all 81 provinces in the Philippines, and having her own travel book, hostel, and restaurant someday. Keep track of her world through her words at www.mikeepascual.com.

There's so much to do in Indonesia, especially for the outdoor lover!

I love how much there is to do in Indonesia, especially Komodo Island!

Very cool that there is so much to do there. I really do want to see Bali though and then go from there.

Oh my friend was just showing me some things she had made using the batik method, I had never heard of it before! It makes for some beautifully dyed clothes, I'd love to check it out in Indonesia.

I've never been to Indonesia. I must say your suggestions and photos are really beautiful and I'd love to go.