What to eat in Argentina: 20 Argentine food you shouldn’t miss

Most of the people I’ve met have heard of Argentina, Buenos Aires, tango and two things more. A lot of them have lived exclusively on meat (with reason, mind you) and mate, but have never heard of the other good stuff. There is so much more to the food culture of Argentina. Having been influenced by the Europeans, you will see the resemblance of Argentine food to that of French and Italian. You will notice that it has too many variations, flavor, and character. To complete your visit to Argentina, here’s a complete guide on what to eat.

That’s the one tourists go for. Cow (or sheep) meat slowly grilled in their skin so the meat keeps its softness and its taste. This way of cooking meat comes directly from the “gauchos” and has now been developed in most restaurants, and even at a gastronomic level. Make sure you don’t leave the country without having tried it!

Many national dishes in Argentina are stews, and this one is no exception; but what a treat! Locro is a thick soup made of pumpkin, beans, corn or potatoes originated from la Cordillera de Los Andes. A hearty and savory dish you can’t miss!

Very similar to Locro, la Carbonada is more substantial and has much more condiments such as peppers, bellpeppers, oregano, onion, garlic, etc. A spicy dish for the strong hearted!

Originated from the NorthWest region of Argentina, la Humita is a corn-based paste delicately seasoned and slowly boiled in a corn leaf. Eat it with bits of cheese, and the trick is done!

Also typical from the NOA region, llama meat is tender and tasty. Not that different from cow meat, just a bit stronger in taste. Usually served as a brochette with a salad on the side. Nothing more is needed!

Quite similar to la Humita, el Tamal is also made out of corn, pumpkin but the paste is filled with meat and dry raisins. Also wrapped in a corn leaf and boiled, it’s simple but so good!

Delicious little calzoni filled with a variety of ingredients: meat, eggs, and raisins; ham and cheese; spinach; cheese and onion and so many more! Every single area of Argentina has a different recipe. In some regions the empanadas are baked, in others, they are fried, salty or sweet, it doesn’t matter because they’re all excellent! And this is one of the dishes likely to become the national traditional dish. Just to tell you that you really cannot NOT try it!

Argentine gastronomy is also largely made of sweet things. If many deserts come from Europe and were brought by the colonizers, they have been changed and adapted. In the end, they are very different from what you can find in Europe or elsewhere. Mazamorra is a dessert made of white corn, water, sugar vanilla, roots and a bit of cinnamon.

A traditional sweet paste that looks and tastes a lot like caramel but is thicker and sweeter. In Argentina, it is used absolutely everywhere, and often replaces chocolate: you can eat it with bananas, bread, cookies, ice cream, cakes — basically, anything you want!

Argentina has too many European influences and yema quemada is one of the things they got from the French. Basically, it’s the Argentine version of crème brulée.

A basic paste made of flour and eggs, slightly sweet of taste and of lighter the consistency than cake. In Argentina, it is used to wrap fillings of ham, cheese, onions, etc. Often served as an appetizer.

An institution! Two or more biscuits put together with jam, the famous dulce de leche or any other sweet paste. Usually covered with chocolate or sugar, one of the favorite snacks of Argentine children!

You cannot miss the mate when you go to Argentina. The “mate” is the name of the content and the herbs we put inside it are called “yerba”. We fill the “mate” with “yerba”, then we add hot water (but not boiling!), or cold water, coffee or orange juice depending on the province, drink and share! The Mate itself deserves a full article because there are certain ways to serve, drink and share it. But definitely try it (careful it’s very bitter in taste!) and never refuse if someone offers one to you.

A thin piece of red meat, the equivalent to a European steak.

A large piece of red meat (much larger than what you’re used to, think a minimum of 600g!), usually with a very little grease, grilled on the barbecue or on a plancha.

Some of you might know it, the milanesa is a breaded and fried escalope (chicken or veal). A very common and popular dish that you can find on any lunch menu, or in any “comedor”.

Pizza in Argentina is somewhat different from the Italian one regarding the thickness and the ingredients. In Argentina, there are a few typical pizzas that you won’t see anywhere else among which: “pizza parrilla”, “pizza de cancha”, “pizza por metro”, etc. The pizza de cancha is just a big pizza with tomato sauce. As simple as that. It’s usually sold around the football stadiums (that gave it its name) and is quite spicy. You will have to try it whenever you go to a football game!

Sweet potato jam. It’s very common as a replacement of the Dulce de Leche or is even eaten as a sole “cake”. You’ll definitely come across it in a local’s home.

Corn, again. You have to like it! The dish is prepared with sweetcorn paste and seasoned. The filling is made of minced beef, onions, and spices. The filling is laid in the bottom of the plate with slices of hard-boiled egg, olives, and raisins.

Argentina is the 5th worldwide wine producer. With that rank you expect the wine to be more than just “good”, and it is. There’s a variety of tastes and textures that differentiate it from French wines. Definitely try a red Malbec or a white Torrontés if you’re a wine lover, you’ll never want to leave! 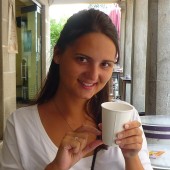 Camille is from Argentina who's been traveling the world since 2011. She started as a solo female backpacker and later became a trilingual teacher. She never stopped moving around and decided to open her blog to show those who dream of traveling what the world is like. In her travel blog, Camila narrates stories, tales and anecdotes about what she experiences when living and travelling in/to countries. In love with life, people and travel, she travels to meet the locals, share their customs and try their food!